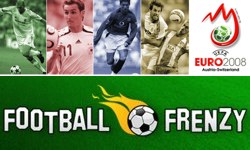 Starting 5 May 2008 all Vegas Partner and Golden Star Network online casinos will launch an innovative new promotion capitalizing on the UEFA Euro 2008 in Austria and Switzerland. Dubbed the Football Frenzy, players will be able to win 2 tickets to attend the Semi-final game on 26 June 2008 at the Ernst-Happel Stadium in Vienna, Austria by playing selected slots games. All you need to do is play selected slots and the top players go into draw to get this dream prize for any diehard football fan! There are 6 Slots, so there are 6 chances!

Promotional period runs from 5 May 2008 - 16 June 2008, 23:59 EST. Players must have made a minimum of $/£/€50 deposit at any Vegas Partner Lounge casino during the promotional period. The top 10 wagerers on each selected Slot Game during the promotion time period will be selected and go into the final draw. Players can have more than one entry into the final draw. The prize is two tickets only to the UEFA Euro 2008 semi-final on 26 June 2008 in Vienna, Austria.

We reccommend playing at Crazy Vegas online casino as new players can claim €/£/$1,000 free and 1 hour to play and win as much as they can. With the popularity of football internationally and especially Europe, this will be a phenomenal promotion for football fans. Another Vegas Partner Lounge member, Cinema casino offers 100% deposit match bonus up to $200 free.