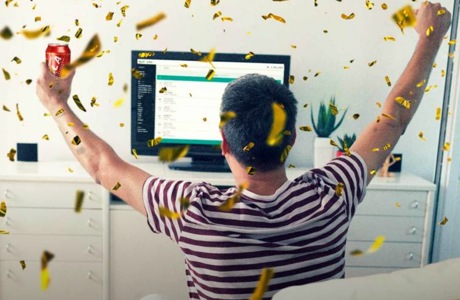 The tension built as mega football accumulator took 1 days to complete.
Just imagine how it feels to know that a fortune rests on the result of the next game. That's exactly how it was for one of the Finnish betting players recently. He landed combined odds of 566-1 to take home a cool €44,598.55.

"I didn't start to feel nervous until Sunday afternoon."
We asked him how it felt while the results mounted up in his favour over the long weekend. He explained that he was quite calm until the 11th of the 12 games came along. A couple of months ago he came really close to a big win, but that time one of the last matches went wrong. He was afraid that history might repeat itself.

"I followed the matches in real time from Thursday. I didn't start to feel nervous until Sunday afternoon. The real nervous point was in one of the last two games. My bet was going wrong at first. My team was losing the match 0-1 until middle of the game but then finally it turned around and ended with a 3-2 win!"

He must be a pretty cool customer because eight of his 12 matches were close games won by a single goal. That's tense! He picked the matches firstly based on the sport he's following and secondly on his favorite betting teams. He follows the Finnish Cup closely, so he felt like he had a hunch about how the games were going to end. And form teams Monaco and Juventus are two of his favourite bets at the moment. In total his 12 games covered eight different leagues and competitions.

A Paf player for 14 years, our big winner explains the attraction of betting with us: "I find Paf has good odds. You are very competitive with the other betting sites and gaming companies."