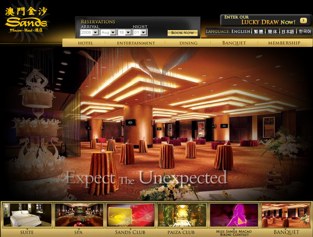 As US tightens up controls on tourists travelling from Europe and other parts of the World, a number of alternatives to some of the most famous hotspots report increased revenues. The Chinese administrative region of Macau has smashed world's casino industry records yet again, it has been revealed.

MacauHub reports that, according to the Gaming Inspection and Coordination Bureau, $7.41 billion was taken by gambling venues in the region during the first six months of 2008. This is almost two thirds of the total revenue generated by Nevada State during the whole of 2007 and is a possible indicator that Macau is about to overtake the biggest casino State in USA for the first time in history.

If revenue continues to be generated at this rate, Chinese Macau will top its own 2007 figures of $10.5 billion in less than 3 months. There are 30 casinos currently in operation in Macau, of which several are owned by US firms, including popular Wynn Macau, MGM Mirage and Sands Macao. Sands' Venetian Macau is the world's second largest building.

According to the publication in the UK's Sunday Times, Macau has "glitzier casinos", "prettier croupiers" and "fancier hotels". "Leave Las Vegas to Bette Midler and head east," the paper said.

Most casino-goers will probably already be aware that Macau is the world's largest gambling destination in terms of revenue and it boasts casinos operated by major biggest players in the industry.

If Las Vegas generates most of its revenue with slot machines, gamblers in Macau prefer baccarat. Baccarat has proven itself to be by far the most popular casino game across the board in Macau, with about 70 per cent of all casino earnings coming from James Bond's favourite gambling pastime.