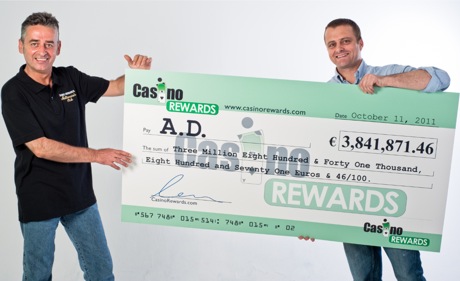 In October 2011, the Mega Moolah reels aligned for novice gambler A.D. who was instantly made 3.8 Million Euros richer! €3,841,871.46 richer to be exact! A short time later A.D. and his partner were flown out to Sydney, Australia by Casino Rewards, to be wined and dined at a 5 star restaurant next to the iconic Sydney Opera House, and handed their life-changing jackpot cheque!

During his visit ‘Down Under', A.D. describes the moment the Mega Moolah jackpot bells rang out in an exclusive interview, and what he plans to do with his equivalent of $5.2 million!

A.D. and his partner were flown out to Sydney, Australia to be entertained at lavish restaurant Aria, overlooking the iconic Opera House and Harbour Bridge. After a press photo event in the beautiful Royal Botanic Gardens, A.D. was handed a cheque for an incredible €3,841,871.46.

For the second time in its award winning 11 year history as the Internet's premier online casino group, Casino Rewards pays out another multi-million dollar progressive jackpot prize. In October 2011, the Mega Moolah reels aligned for novice gambler A.D. who was instantly made 3.8 Million Euros richer!

"I plan to give something from my winnings to charity, and then I will help some relatives, my girlfriend ... some more travelling too, that's for sure! I may never stop working ... I may have some other people working for me ... basically I'm not in a great hurry to spend this money." - A.D.'s interview to Casino Rewards.

The life changing sum went down in history as the 2nd biggest online jackpot win at a CasinoRewards casino, following K.E. and his staggering $5.5 million win in 2008 on the very same online progressive slot, Mega Moolah.

"The day I won the jackpot is a beautiful memory ... it was not long ago, so it's still quite vivid. I played Mega Moolah, the jackpot screen opened, the wheel was spinning, there were a few segments on which it could have stopped, but that was exceptional and I thought that that could not happen to me ... but it did! I could not believe it at first, then I called to make sure, because I thought it could be an error ... but it wasn't! I stayed there for I don't know how long, staring at the ceiling and thinking lots of things. At first I didn't think much, I only thought that my life was most probably going to change." - said A.D.

Both A.D. and K.E. hit the jackpot using free Casino Rewards bonus money which anyone can claim! The free sign up money is available online, with the most appealing being €/$1,500 free at Golden Tiger Casino; £/€/$1,250 free at Casino Action and €/$500 free at Casino Classic. Sign up at Casino Classic, Golden Tiger Casino or any of the other award winning Casino Rewards brands to receive your free bonus money today! Members of the public can sign up for free within minutes at any of the Casino Rewards online casinos and be playing Mega Moolah or any of the 450+ online slots and other games in the comfort of their own living room.

"I first heard about Casino Rewards because I received an envelope at home with a CD from Challenge Casino. I downloaded it and everything started from there. I like their service in particular. If you need, there's always someone available to assist you, so it becomes something very normal, like playing at home." - added A.D.